We specialise in fully immersive games in which a team of 2-6 players discover clues, solve puzzles, and complete tasks in one or more rooms in order to accomplish a main goal within 60 minutes.

Our current game, The Missing Gem is suitable for between 2 - 6 players.
Any children under the age of 16 must be accompanied by an appropriate adult.

For a limited time only, during the festive season.

Prices range from £15 - £25 per person, depending on the number of people in the party.

We specialise in fully immersive games based on solving puzzles and completing tasks within a specific time-frame, where teamwork is the key to success. 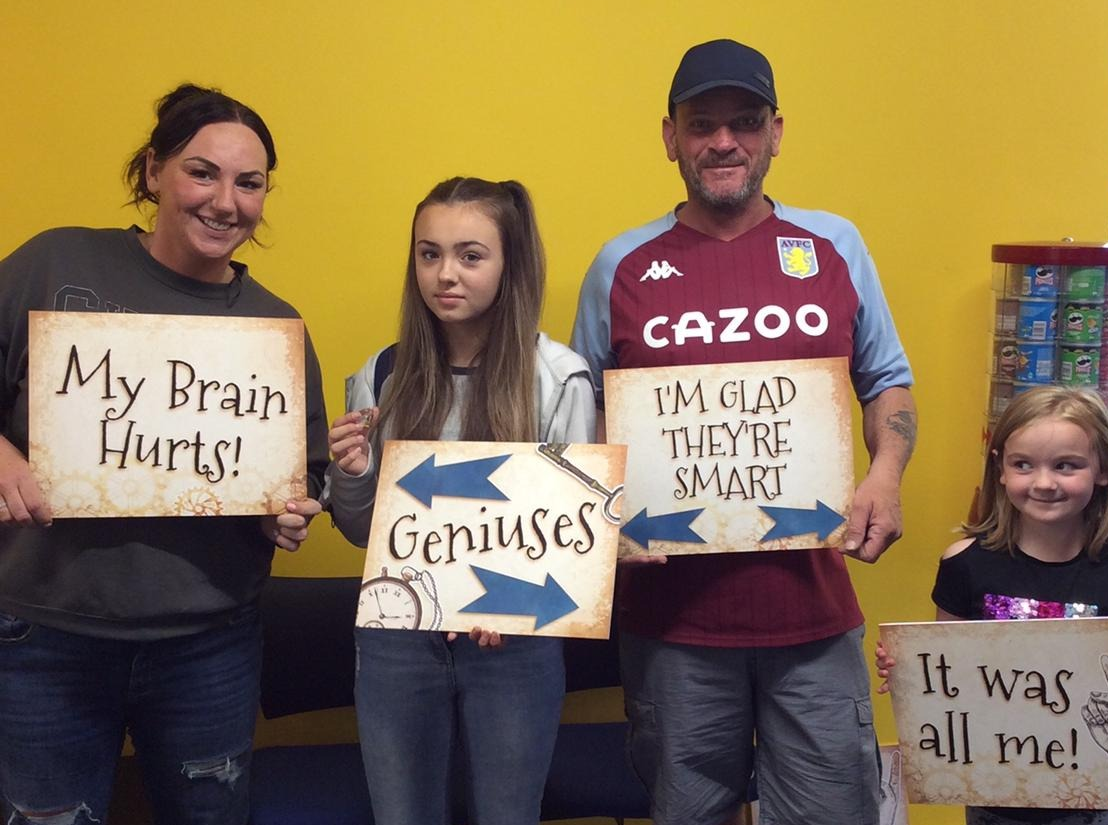 Our games are suitable for between 2 - 6 players.
Everyone is welcome to play although, children under 16 must be accompanied by an appropriate adult.

For a limited time only, during the festive season,

Price per person ranges from £15 - £25 depending on the number of people in the party.

Our prices are as follows:

Please complete the form below.

You are booked to play:

Your confirmation code is:

Please make a note of this code and keep it private.

A copy of this information has been sent to:

Please make sure the following details are correct
before continuing.

Are the details above correct?

Please tick the box if the details are correct.

The Missing Gem is an escape game based on a fictional story called the Lovegrove Affair, inspired by a true event known as the Staffordshire Hoard.

A tale of lies, deceit and murderous intent.

In this game, you are presented with a set of tasks and puzzles in which the end goal is to find the Missing Gem, a flawless thousand carat diamond from the hoard, believed to have been stolen by one of the lead archaeologists of the project Dr Lovegrove.

Dr Stephen Lovegrove was the head of a team of archaeologists during the discovery of the Staffordshire Hoard. Before the excavation of the site was completed, Lovegrove abruptly resigned and left the project.

According to historical records, the team should have expected to find the Rugeley Gem, a thousand carat, flawless diamond, which was believed to have been buried with the treasure. The gem was never found but team members always found the circumstances around Dr lovegrove's resignation a little odd and began harbouring suspicions that he may have kept it for himself.

Driven by their suspicions, a private investigator was hired by the team to install a hidden camera in Lovegrove’s office. After not hearing from the PI and and finding out that no one else had seen or heard from him since he was given the task, the team decided to report the goings on to the police.

Although the police conducted an investigation, they found no evidence of foul play and Lovegrove was let off the hook and with only circumstantial evidence that the gem even exists, authorities are unwilling to conduct any further investigations into Lovegrove’s affairs.

Undeterred by this, the team are convinced that the gem is stashed within a secret vault in Lovegrove’s office and are determined to retrieve it and hopefully solve the riddle of the missing PI.

All that is needed is a window of opportunity. A cunning plan is conjured up where Lovegrove will receive a call from a senior member of the archaeology community that another hoard has been discovered and that he must get to the site before it is bought to the attention of the local press and the place is swarmed by enthusiasts.

It will take the greedy and excited Dr approximately 30 minutes to drive to the fictitious site and the same for an angry and unscrupulous mad man to return.

From the time Lovegrove leaves the office you have 60 minutes to solve the puzzle and get the hell out of there. Good luck.

Before booking, please ensure you have read our rules and guidelines here. Our full terms and conditions can be found by clicking here.

Why not make a day of it?

Conveniently situated in the heart of Rugeley Town centre, right next to the bus terminus and just a stone's throw from the local train station.
Parking is available at the council run, Market Hall Rooftop Car Park. Access to the car park is via Bees Lane, off Elmore Lane, WS15 2DR, less than a minute's walk away from the Escape Room.
We are also next door to Costa Coffee, and within easy walking distance to all of the other amenities that Rugeley Town has to offer.

WHAT ARE YOU WAITING FOR?